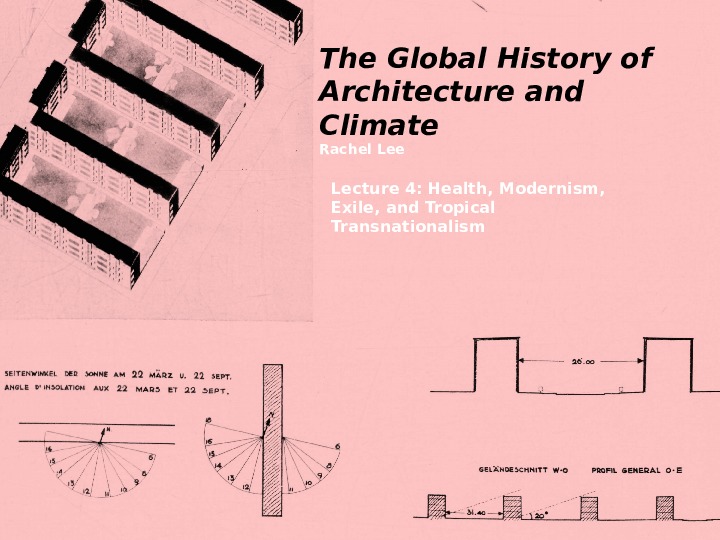 The Global History of Architecture and Climate

The purpose of this lecture is to demonstrate links between architecture and climate that developed from the late 19th century to the mid-20th century. Part 1 begins by illustrating how attempts to treat and prevent tuberculosis, an urban disease, had a direct impact on the development of architectural typologies and forms. As the treatment of tuberculosis was closely linked to the environment and climate, architects around the world had to design buildings (in the main sanatoriums) with an increased awareness of the effects of sunlight and fresh air. The forms of these new buildings, which attempted to maximise the patients’ exposure to the sun and air through features such as verandahs and terraces, and the increased awareness of the effects of weather and climate on the inhabitants, soon influenced other building typologies, particularly housing in densely populated urban areas where living conditions were unsanitary and unhealthy. Designing healthy, affordable housing became one of the main goals of the architects associated with the modern movement. While this happened across Europe and in the USA, this lecture focuses on the German example, both because there was a strong collective movement around these issues and because there was a longer history of building with an awareness of climate. After outlining the accompanying ‘scientific’ shift in architecture, Part 2 closes by questioning how the ideas of the (predominantly German) modern movement spread around the world. A slide illustrating the exile paths of 24 German-speaking architects following the seizure of power by the Nazi Party in 1933. Parts 3 and 4 demonstrate the spread of scientific, climate-conscious architectural design through a case study of the Berlin-born architect Otto Koenigsberger (1908-1999). Due to his Jewish background, Koenigsberger had to flee Germany in 1933. The lecture tracks his exilic trajectory from Berlin to Cairo, Egypt, then to Davos, Switzerland, and finally to Bangalore in India, examining his climatically-sensitive approach to architecture and analysing how it changed and developed through his exposure to different cultures. It illustrates his attempts to create buildings that were rooted in local building cultures and spatial practices, and responded, as efficiently as possible, through materials and forms, to climatic and social conditions. Part 5 follows Koenigsberger through the mid-century ‘tropicalisation’ of architecture. It discusses how Koenigsberger and colleagues such as Robert Gardner-Medwin, Jane Drew and Maxwell Fry, who, unlike Koenigsberger, had previously worked in colonial contexts, contributed to the institutionalisation of ‘tropical architecture’ in the metropole of London. Through conferences and a course at the Architectural Association tropical architecture became established as a field that promoted climate appropriate architectural solutions in countries of the ‘Global South’ – generally colonies or former colonies – that relied on features such as appropriate orientation, natural ventilation, narrow floor plans, sun-breakers and verandas to regulate the temperature within the spaces.