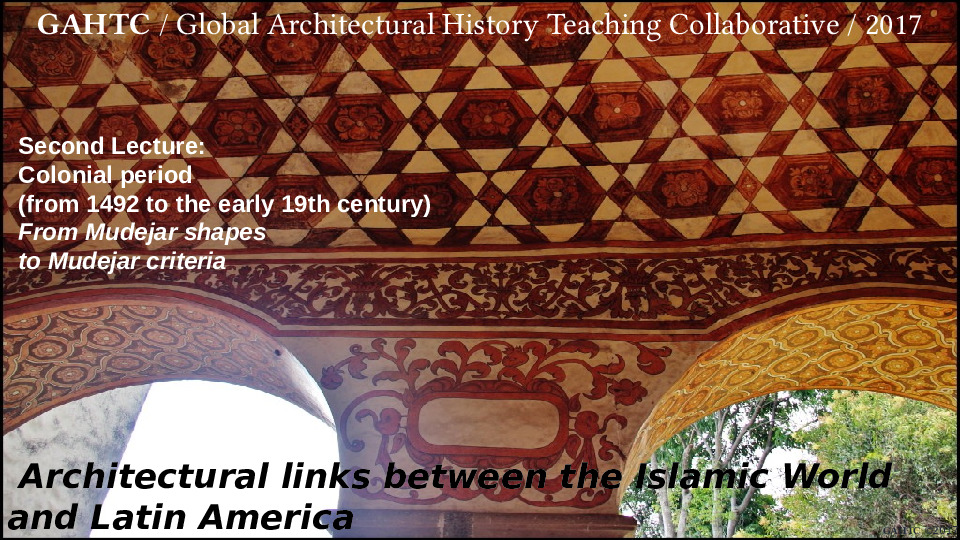 Architectural links between the Islamic World and Latin America

Lecture Abstract: Imaginaries about Latin America place it at a considerable distance from the Islamic World. Languages, religions and cultural paradigms lead us to associate Latin America either with the Occident, the pre-Columbian or, in some countries, with the Afro culture. We rarely imagine links with the Islamic World. But, surprisingly, there are many connections between both cultures. First, because of Spanish Mudejar or Moorish heritage and then as a consequence of the Arab immigrants or other Arabic influences. The intention of this module is to explore those links and deepen the specific field of Architecture. There is a similar work about this topic in the United States, the book “Domes, arches and minarets: A history of Islamic inspired buildings in America” by Phil Pasquini (Flypaper Press, 2012) which is more photographic than theoretical, but the selection of works is singularly complete. Islamic traces in Latin American Architecture can be studied in three periods, because they represent different epochs, contexts and problems, and their causes and consequences in architecture and daily life have highly dissimilar qualities. So, we developed this module into four lectures, an Introduction and one for each of these periods. Beyond the introduction, this lecture briefly outlines these units: 1. Arabic component of Ibero-american culture 2. Apparent differences between both cultures, but… 3. Arabisms of the Spanish language 4. Spanish “Reconquest” war and it consequences 5. “Aljamiado” texts as a metaphor of the Arabic component in Spanish culture. Lecture 2: Colonial period (from 1492 to the early 19th century) From Mudejar shapes to Mudejar criteria (developed by Fernando Martínez Nespral) Lecture Abstract: The main topic on this period is the continuity of Islamic characteristics in the Spanish colonies´ culture. We can find in Hispanic societies from 16th to 18th centuries many traces of Medieval Islamic Spain. When Spaniards came to America, they brought all Hispanic-Islamic experience and knowledge to this continent. This kind of culture it is known like “Ibero-American Mudejar”. (From the Nineteenth Century, Spanish-Arabic Art was called Mudejar referring to the name of Muslims living in Medieval Spain under Christian rules) Talking specifically about Architecture, we must mention Mudejar ceilings. They are the most well-known examples of this period and there are several cases across the continent. Less widely known are the mixed lines Mudejar arches, (mix of straight and curved lines). In addition to these Mudejar shapes and techniques, we have in Latin American Architecture many Mudejar design criteria. In these cases, the Islamic connection is indirect. A very particular example is that several churches around the continent are located in front of the square, facing it by its greater side and not by the smaller one, opposite to the altar. In this way, the facade offered by the church towards the main urban space is the least elaborated and the interior circulation forced us to twist ninety degrees. This happens in many Spanish cathedrals like Seville, because those buildings were originally constructed as mosques and later reused or reformed. On the contrary, in America, cathedrals were new constructions built after the conquest. But Spanish conquerors wanted to replicate here the churches of their peninsular cities. So, they were replicating in America (without specifically articulating it as such) old reconverted mosques. Units of Lecture 2 1. Mudejar Shapes and Mudejar Criteria 2. Mudejar wooden roofs 3. Ajracas´houses 4. Mudejar mixed lines arches 5. Mudejar latticed balconies and “tapadas” 6. Churches as Mosques